Weiss Crypto Ratings, a crypto and financial ratings company, managed to divide the crypto community on Twitter yet again by saying that Cardano is “clearly” superior to EOS. While many were arguing over the merits of each project, most agreed that the company has lost all of its credibility.

Crypto rating company stirs the pot with yet another bold claim

After the ICO boom of 2017 died out, the crypto space seemed ready to adopt more serious, research-driven projects. Companies working on ambitious projects such as Cardano, EOS, and TRON began gaining a lot of traction, each one gaining an incredibly dedicated following.

With that, the competition between similar projects, or projects looking to solve similar problems, began to rise. A deep schism was created in the crypto community, every group more determined than the other to fight for the success of the project it supports.

In such a climate, any statements directly comparing two projects are almost always going to wreak havoc within the crypto community, which is why most steer clear of any controversial statements. Weiss Crypto Ratings, on the other hand, doesn’t.

The rating company gas garnered quite a reputation for its inflammatory comments online. Just last week, the company went ahead with a very bold proposition, suggesting the XRP community should transfer to XLM, as Stellar had more of a “technological advantage” over Ripple’s platform.

Continuing to stir the pot, Weiss then tweeted another unsubstantiated claim, saying that Cardano was “vastly superior” to EOS. 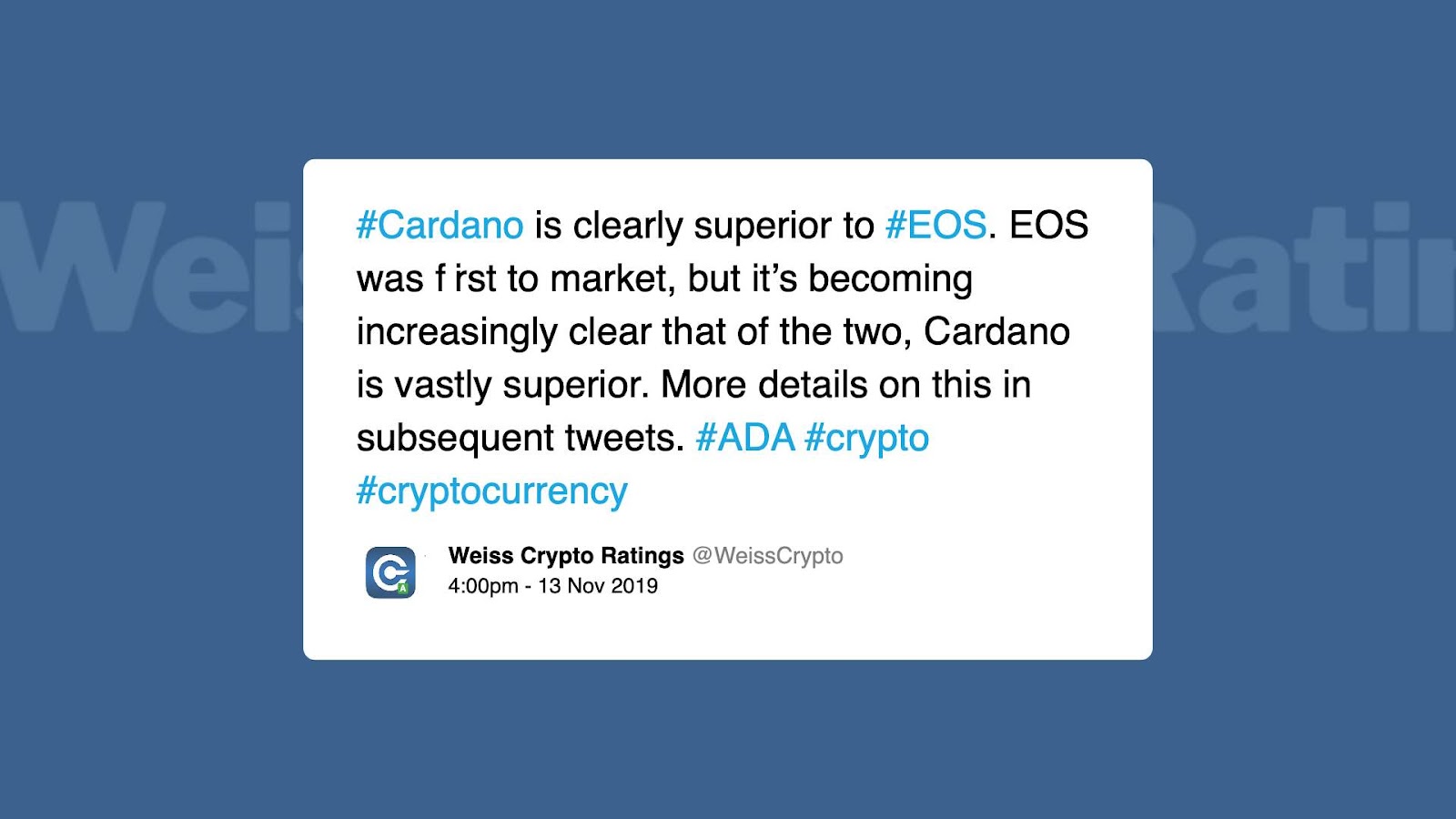 Weiss followed up its assertion in a series of tweets starting with its observation that EOS has centralization problems.

1/4 Not only does #EOS have problems with centralization, but lately, the network has also been unable to process any transactions for anyone who doesn’t have a substantial amount of EOS locked up and staked. This is a result of EOS trying to go with a feeless structure.

In a follow-up tweet, the company shared more details backing up its claim. Namely, Weiss Crypto said that the reason Cardano was superior to EOS was that it had just completed the first snapshot and balance check of the network for the Shelley incentivized testnet. 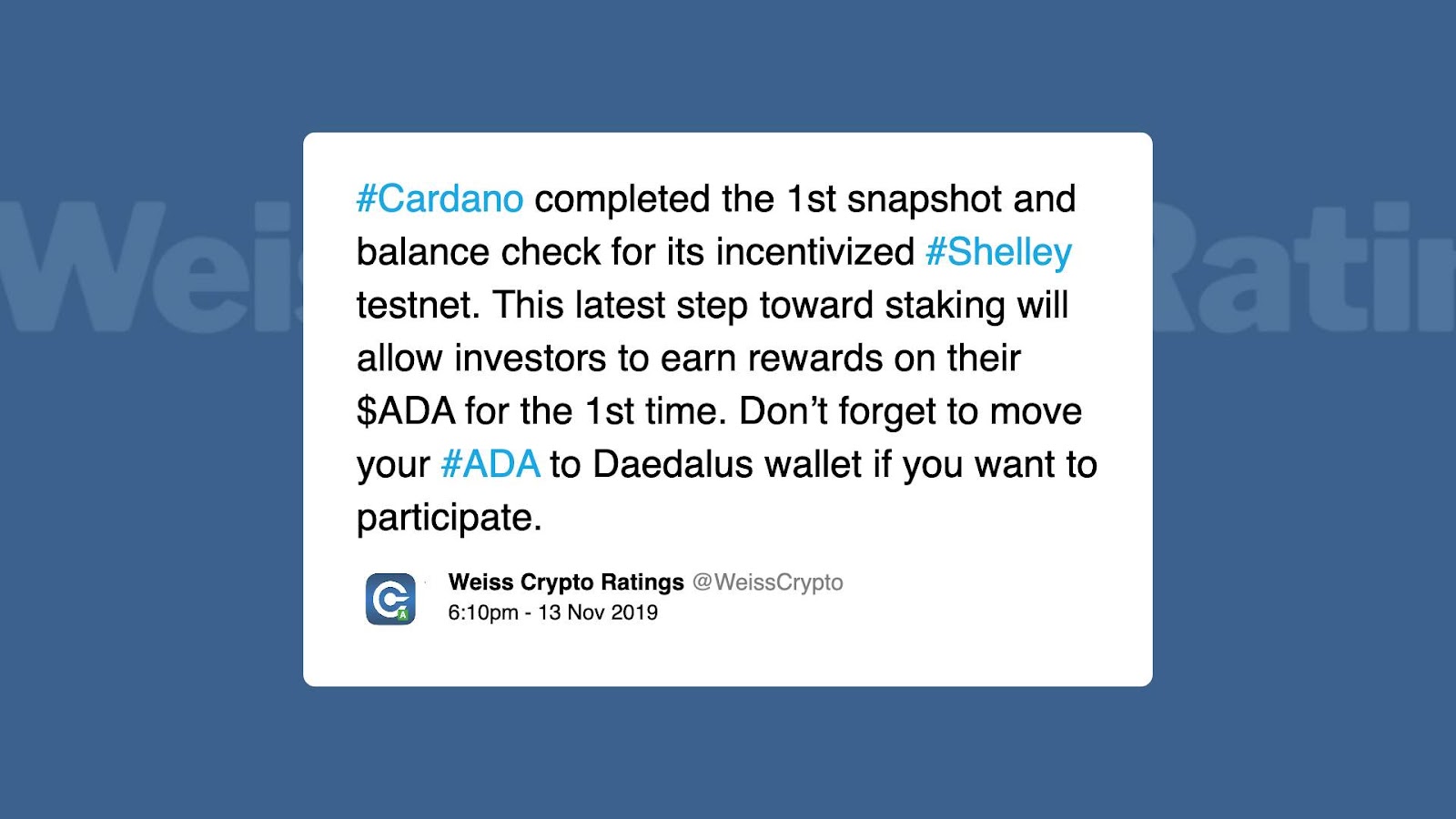 The explanation, as many users pointed out, sounded more like an advertisement for Cardano than a well-thought-out argument.

As expected, the statement caused quite a reaction on Twitter. Hundreds of users responded to the tweet and the reactions were mixed, to say the least. While some contested the assertion of Cardano’s superiority, saying EOS had a far bigger user base and potential, others were adamant in their defense of the yet-to-be-functional Cardano.

Seriously, this one tweet discredits your entire brand in an instant. pic.twitter.com/IsfpbAaWLg

However, despite the vast differences in opinion, almost everyone seemed to agree on one thing—Weiss Ratings has lost the little credibility it had.

Leaving EOS and Cardano aside, there is an argument to be made here that a company that provides “unbiased” ratings of stocks, ETFs, financial institutions, and cryptocurrencies should restrain itself from making statements like these.

36% Of Small U.S. Businesses Accept Cryptocurrency Payments, According To A Survey